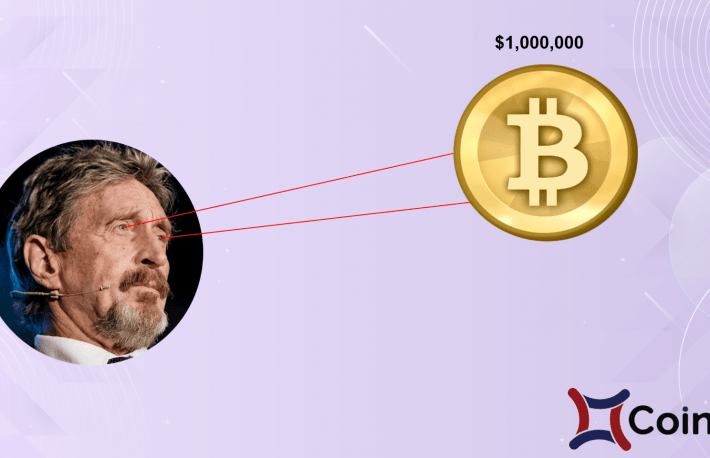 John McAfee, founder of the software company McAfee and outspoken cryptocurrency bull once made a prediction about Bitcoin. John McAfee first predicted Bitcoin to reach $500,000 by the end of 2020, however, according to another tweet, the model he used to predict that price was wrong and the right prediction was, in fact, $1,000,000.

On top of that, McAfee also said he would eat his masculine member on national television if Bitcoin doesn’t hit $1 million by the end of 2020.

if not, I will eat my dick on national television.

These tweets weren’t really a surprise as McAfee is known for saying some of the craziest stuff you can think of. McAfee has tweeted photos of him when in jail, threatened the CIA and is even running for the U.S. presidency.

Back on the topic, how is McAfee doing right now in regards to his bet? According to his model, Bitcoin should have been trading at around $108,000 by now, however, Bitcoin has just recently crashed down to $7900.

Anyone can check how McAfee’s prediction is doing here. According to the creator of the website and following McAfee prediction model, Bitcoin needs to grow at a rate of 0.484095526% per day to reach $1 million by the end of 2020.

We have done the math. The best possible outcome for us would be Bitcoin hitting $999,000 by the end of 2020. We will be rich and we still get to see Mr.McAfee eat his masculine member on National Television.

Unfortunately for us, McAfee has never ever lost a bet before.

I gave never lost a bet

We also found out that he is not even planning to do it:

If the worst comes and I lose my Bitcoin bet (keep in mind I promised to eat my dick. The cutting it off first was added by the media), I will probably subcontract the task to a relay team of Bangkok prostitutes with instructions to carry out the task slowly, finishing as I exit