Ripple Looking to Effect New Investments and Acquisitions After MoneyGram 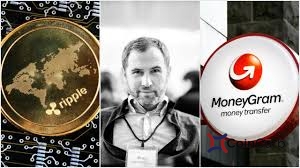 The CEO of blockchain payment firm Ripple, Brad Garlinghouse, has revealed that the firm is looking towards effecting new investments and acquisitions, following a $30 million partnership deal it signed with major remittance firm, MoneyGram. This was reported from a source on August 9.

According to the report, the deal signed between Ripple and MoneyGram, earned Ripple ownership of 10% stake in the entity, with option to increase its stake on the firm by another $20 million in the next two years.

Speaking in an interview with Yahoo Finance, the CEO, Brad Garlinghouse, said: “We’re in a very strong position, our business is growing strongly, we have a strong balance sheet, and I intend to press our advantage.”

The $30 million deal is no doubt paying off, as MoneyGram CEO, Alex Holmes, in an announcement on August 3, disclosed that it has begun using Ripple’s xRapid liquidity product.

Garlinghouse further disclosed that MoneyGram integrated Ripple’s tech alongside its US dollar to Mexican peso and US dollar to Philippine peso pairings. Debunking claims that Ripple had forked out a premium on MoneyGram shares as a form of inducement for the remittance firm to adopt its tech, he said:

“I wouldn’t characterize it as an inducement […] we’re getting more and more customers to sign up and we’re seeing that value. If we want to accelerate that, we have the option of doing things that might be perceived and characterized by some as an inducement.”

He added that the firm will do “Anything it can to accelerate our growth and give us more capabilities that serve customer needs is a good place to be,” “We’re probably the largest investor in blockchain and crypto on the planet. We’ve publicly announced we’ve made about $500m [of investments] in the space over the last 18 months,” he said.

Also speaking on the impact the MoneyGram partnership will bring to play in the crypto world, Garlinghouse noted that:

“This is a big deal. If I were betting now, a year from now the MoneyGram deal will have a more consequential impact on the crypto markets than the Libra white paper.”